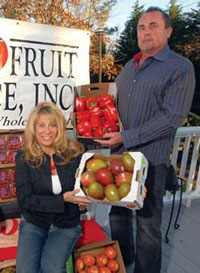 Ward’s Fruit and Produce is a fourth generation, family owned and operated wholesale produce distributor. We have been providing fresh produce to the Triangle area for the better part of a century.

We first opened our doors in 1934 on Mangum Street in Durham, NC primarily as an open air market retailing fresh produce.

In 1991, the State Farmer’s Market built a new facility off Lake Wheeler Road.  Ward’s Fruit and Produce moved to this new location and increased its warehouse to 9,000 sq. ft., encompassing 6,000 sq. ft. of refrigeration.  Ward’s continues to deliver fresh fruits and vegetables to the area with additional expansion of delivery areas and product availability.  The company is now operated by Joey and Lonnie McNeill – daughter of Howard Ward.

In 2003, Joey and Lonnie McNeill opened their own produce company to continue the family tradition with Ward’s Triad Produce that is also located at the State Farmers Market in addition to operating Ward’s Fruit and Produce.  They both continue to provide the same excellence of service and quality products that was handed down from generation to generation.

In order to keep up with today’s health and safety issues, Ward’s voluntarily implemented a program known as a Food Safety Program which is part of a HACCP program, which is a nationally approved sanitation program specifically designed for the produce industry.  Our current audit was performed by Steritech and we  maintain our superior rating of 99.01%.

While Ward’s Fruit and Produce  and Ward’s Triad Produce continue to grow, we have never lost sight of the initial goals, which gave us the successful reputation we have today – providing quality products with excellent personal service and competitive prices.